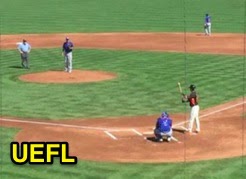 HP Umpire Dale Scott was injured on a pitch to the hand during the first inning of Thursday's Cubs-Giants split-squad game and left the field as a precaution. With none out and none on, Giants batter Nori Aoki took a 0-0 pitch from Cubs pitcher Jacob Turner for a called ball. The pitch evaded catcher Welington Castillo and struck Scott's hand.

As 3B Umpire Mark Ripperger retreated to the umpire's dressing room in order to change into his plate gear, 1B Umpire Jim Joyce stepped behind the mound to call balls and strikes with 2B Umpire Ron Kulpa filling in at first base, recalling memories of Spring Training 2013, when veteran Tim McClelland served as umpire-in-chief from behind the pitcher after plate umpire Seth Buckminster broke his hand on an errant Wily Peralta fastball that also struck batter Albert Pujols.

Information on Scott's condition was not immediately available, though we later confirmed Scott suffered a "bruise" and was placed in a temporary sling (he returned to the field on Saturday); Having recovered from his hand injury, Buckminster worked 66 games during the 2014 MLB season. Ripperger returned to the field as the plate umpire in the bottom of the second inning.