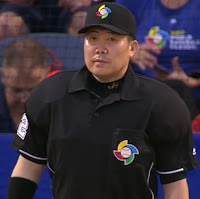 Umpires for the 2016 World Baseball Classic Qualifier (Australia Stage) convened in Sydney, AUS and officiated the first round of qualifying games for the upcoming 2017 WBC, featuring teams from Australia, New Zealand, Philippines, and South Africa. Six games were scheduled from February 11 through February 14 (Feb 10-13 ET).

The following is a list of the six umpires who have been assigned to and appeared during the WBC Q1 stage, along with their respective countries and leagues of representation. (Pictured to the right is South Korean Umpire Kun Young Park.)