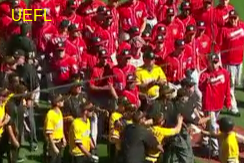 HP Umpire Jordan Baker ejected Nationals P AJ Cole for throwing at Pirates batter Jung Ho Kang and Pirates 1B Sean Rodriguez for fighting in the bottom of the 3rd inning of the Nationals-Pirates game. With two out and none on, Kang took a 0-0 fastball for a called first ball. Replays indicate the pitch was located three feet off the inner edge of home plate and head high (px -3.859, pz 4.885 [sz_top 3.610]), the call was irrecusable. At the time of the ejections, the Nationals were leading, 4-3. The Nationals ultimately won the contest, 10-7.