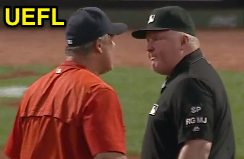 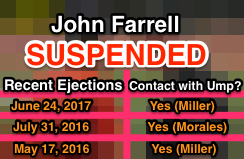 3B Umpire Bill Miller ejected Red Sox Manager John Farrell (balk call) in the top of the 7th inning of the Angels-Red Sox game. With one out and one on (R3), U3 Miller called Red Sox pitcher Fernando Abad for a balk as Angels batter Kole Calhoun request and was granted "Time" from HP Umpire Ryan Blakney. Replays indicate that prior to Blakney signaling and verbalizing "Time," Abad's left shoulder moved and his left leg and foot disengaged the pitcher's plate in seeming contravention of Rule 6.02(a), but, due to the "Time" call, the shoulder turn-disengagement move cannot conclusively be said to have violated nor complied with the restriction imposed by this rule, but pursuant to Rule 5.04(b)(2) Comment, the batter cannot inadvertently cause the pitcher to interrupt his delivery after the pitcher enters set position, the call was incorrect.*^ Ruling reviewed and overturned by the UEFL Appeals Board (8-1-0). At the time of the ejection, the Angels were leading, 5-1. The Angels ultimately won the contest, 6-3.

This is Bill Miller (26)'s first ejection of the 2017 MLB regular season.
Bill Miller now has 1 point in the UEFL Standings (3 Previous + 2 MLB - 4 Incorrect Call = 1).
Crew Chief Bill Miller now has 2 points in Crew Division (2 Previous + 0 Incorrect Call = 2).
*OBR 6.02(a): "It is a balk when—The pitcher, while touching his plate, makes any motion naturally associated with his pitch and fails to make such delivery."
OBR 5.12(b): "The ball becomes dead when an umpire calls 'Time'" (not when a player requests "Time"). (8) "...no umpire shall call “Time” while a play is in progress" (a balk is considered a play).
^OBR 5.04(b)(2) Comment: "If after the pitcher starts his windup or comes to a “set position” with a runner on, he does not go through with his pitch because the batter has inadvertently caused the pitcher to interrupt his delivery, it shall not be called a balk. Both the pitcher and batter have violated a rule and the umpire shall call time and both the batter and pitcher start over from 'scratch.'"
Related Post: Calling Time to Avoid a Balk - When a Ball Becomes Dead (5/10/16)
Related Post: Starting from Scratch - Batter Disrupts Pitcher's Delivery (6/29/16)