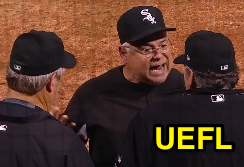 HP Umpire Hunter Wendelstedt ejected White Sox Manager Rick Renteria (ball one call; QOCN) and pitcher Jake Petricka (balls/strikes; QOCY) in the top of the 6th inning of the Yankees-White Sox game. With two out and one on (R2), Yankees batter Ronald Torreyes took a 0-1 fastball from Petricka for a called first ball before doubling on the ensuing pitch. Replays indicate the pitch was located over the heart of home plate and knee-high (px .104, pz 1.642 [sz_bot 1.481 / MOE 1.564]), the call was incorrect. Petricka's ejection occurred following the conclusion of the half-inning. Replays indicate that of the 13 callable pitches ruled ball, 12 were properly officiated (12/13 = 92.3% accuracy), the call was correct. At the time of Renteria's ejection, the Yankees were leading, 5-2. At the time of Petricka's ejection, the Yankees were leading, 8-2. The Yankees ultimately won the contest, 12-3.