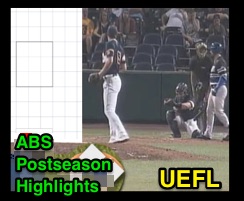 The Atlantic League, ahead of MLB's postseason, carried its TrackMan Automated Ball/Strike System (ABS) into the playoffs in York, with the Revs broadcasters and players appearing to grow frustrated with the computer zone now that the games actually matter...a sign of things to come?

The Freedom Division Championship Series between Sugar Land and York, won by the Sugar Land Skeeters, featured quite a few interesting rulings from ABS, with broadcasters at one point turning an adjective sometimes used (by Hawk Harrelson) to describe umpires into an insult intended for the electronic strike zone: "Man, that was brutal...that one was just plain bad."

Has the ALPB ABS honeymoon officially ended now that the postseason has arrived?

The other main highlight of ABS in York pertained to time spent waiting for ABS to make a call, including some calls resulting in a three-plus second delay such that the pitcher had already received a throw back from his catcher before the home plate umpire made a call, adding to the visible confusion.

Imagine a one-out, two on (R1, R3) situation with a 3-1 count and the runner from first base taking off for second. The catcher doesn't have the luxury of waiting three seconds to find out if ABS tracked the pitch as a ball or a strike, so his throw down to second base gets away and into center field, enabling the runner from third to score and the runner from first base to advance to third. And after all of that mess, ABS rules the pitch ball four anyhow, rendering the throw to second entirely unnecessary.