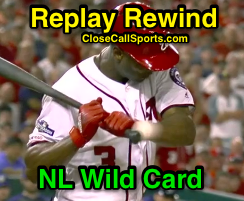 Before Nationals batter Juan Soto's bases-clearing RBI single/error gave Washington the lead over Milwaukee in the NL Wild Card Game, a Replay Review decision upheld HP Umpire Mike Everitt's HBP call on Michael Taylor, who would become one of the baserunners that put the Nats ahead for good.

First Things First: 1B Umpire Kerwin Danley had a pulled foot (safe) call challenged by Milwaukee early. I too had a pulled foot by the Brewers first baseman in real time and on replay, I couldn't quite confirm it. That's good enough for a call stands i my opinion. Because the end result (safe) jived with my initial thought (safe), I didn't spend too much time here.

The Main HBP Event: As for the 8th inning HBP that set Washington's rally into motion, I had a hit-by-pitch in real time, but on replay at first glance, I had a foul ball. Slowing it down even further, I couldn't be quite certain that Josh Hader's pitch hit Taylor's bat first, though I still believe it did.

Mark it down as Craig Counsell going 0-for-2 on the night in replay (teams get two Manager's Challenges to use during the postseason), though both plays were fairly close—the second of which was the definition of a 50-50 call.

It would have been great to have at least one more frame with which to slow the tape and a useful camera angle not obstructed by the bat itself (nor by the player), because from this angle, I can't tell if the ball glanced off the wrist before hitting the bat. An aerial view, like the top-down in Tampa Bay, would have been key.

This is why the initial call on the field is so important and why a crew consultation is absolutely vital: when "call stands" is the outcome because of inconclusive or unclear video, the original on-field ruling is what will prevail.
Related Post: Crew Consultation - Importance of the Call on the Field (10/2/19).