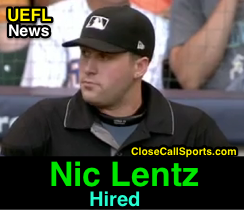 New-hire Lentz received the UEFL's Best Ejection of the Year Award in 2018 following his banishment of Aaron Boone in New York over a balls/strikes dispute.

As we noted in the wake of a slew of Yankees ejections in 2019, Boone appears to find himself ejected by Triple-A call-up umpires at a disproportionate rate, and Lentz constitutes the first Triple-A Boone ejector to be subsequently hired by MLB to the full-time staff (Boone has only been managing the Yankees since 2018).
Related Post: 2018 UEFL Award for Ejections of the Year - West & Lentz (11/8/18).

In 2018, we identified Lentz as the MiLB umpire most likely to be hired by Major League Baseball. He fills the vacancy left by the loss of longtime MLB umpire Eric Cooper.
Related Post: Future MLB Hiring Outlook at the 2018 Break (7/16/18).
Related Post: Eric Cooper Dies at 52 Following Blood Clot (10/20/19).
Lindsay (@LindsayImber) at 10:30 AM
Share