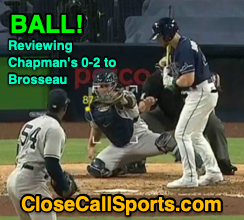 Before Tampa Bay eliminated New York from the 2020 postseason, HP Umpire Marvin Hudson had a key 0-2 ball call during Rays batter Mike Brosseau's 8th inning at-bat vs Yankees pitcher Aroldis Chapman, but was it correct? We ran the numbers and checked in with Robo-Ump for the verdict.
With the score tied 1-1 in Game 5 of the American League Division Series, Brosseau stayed alive by taking Chapman's 0-2 offering somewhere in the vicinity of the outside corner: but exactly where was the pitch located relative to the outer edge of home plate and was Hudson's ball call proper?
After all, Brosseau eventually hit the eventual game-winning home run later in the at-bat, giving extra importance to the crucial 0-2 ball call. Yankees fans online demanded an explanation for this game-changing "blown call" (or was it?).

Setting the Framework: As we've explained (many times) in the past, the pertinent variable for horizontal ball/strike calculation is px. To calculate the boundary of px that delineates ball from strike, we perform a bit of upfront math.
Because px is measured from the center of home plate (negative values to the left [from the catcher/umpire's perspective], positive values to the right; for simplicity's sake, we are only concerned with the absolute value of px [all values are treated as positive numbers]), we divide the 17 inch-wide home plate in half to get 8.5". Converted to feet (8.5 x 12), this is 0.708 feet to either side of home plate.
We also know that any part of the ball traversing any part of the strike zone makes the pitch a strike, so we must add the radius of a baseball to .708 to get .831 feet as our px boundary (.708 ft half-plate + .123 ft ball radius = .831 ft zone edge). 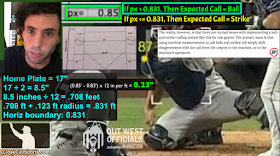 Thus, with the horizontal boundary set at 0.831 feet, all we must do is consider the 0-2 pitch's px value: if px is greater than 0.831.
Chapman-Brosseau's 0-2 px value was 0.85.
Now, the math becomes really easy: Because 0.85 is greater than 0.83 (sig digs), we know that the expected call for this pitch under ML Public is a ball (by just 0.23 inches): all three systems thus agree, Hudson's ball call was the correct call.
For better or worse, if Twitter is any judge, a pre-computerized strike zone prognostication from Baseball Prospectus may have come true. The prediction? "The primary issue is that using machine measurements to call balls and strikes will simply shift disagreements with the call from the umpire to the machine, or to the machine's operators."
And for the record, Hudson's final plate score numbers indicated a skew of +3 New York.

Alternate Link: Review of Chapman's 0-2 Pitch to Brosseau in Bottom of 8th of ALDS (CCS)
Lindsay (@LindsayImber) at 4:04 PM
Share