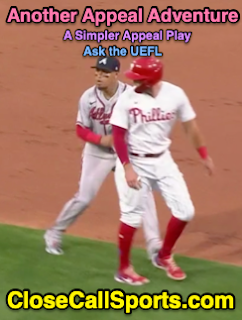 On the heels of Wednesday's Pirates-Nationals complicated tag up appeal play fourth out situation, we find another tagging up/retouch appeal play during the Braves-Phillies game in Philadelphia, but this one is a lot easier to parse than the Washington event.
Play & Calls: With none out and two on (R1, R2), Phillies batter Nick Castellanos hit a deep drive to left line drive to right field, where Braves right fielder Adam Duvall dove in an attempt to catch the ball, ruled a catch by 1B Umpire Quinn Wolcott.
Phillies baserunner R2 Kyle Schwarber timely tagged up and advanced to third base as Atlanta's Duvall threw to second baseman Orlando Arcia, who stepped on second base to appeal R2 Schwarber for leaving early (ruled an out by 2B Umpire Alex Tosi) before running to tag Phillies baserunner R1 Rhys Hoskins while Hoskins was half way between first and second base (ruled an out by 2B Umpire Tosi).
Note: If you want to get Hoskins for abandoning his effort to run the bases for erroneously assuming a force out where the force was removed by virtue of the batter being declared out on the fly out, that is your prerogative, but for this specific play, the tag-out is a much better call.

Analysis: For a detailed analysis of appeal situations relative to this kind of a double play (initially a triple play until Replay Review overturned Tosi's out call on Schwarber [because Schwarber did tag up legally]), consult the Pirates-Nationals fourth out play article and video, but for the purpose of this play in Philadelphia, it's a simple case of appealing on one runner at a time (there was no runner standing on second base at the time of Arcia's appeal): compare that to the Washington play when a runner was standing on the base which may or may not have been appealed regarding the other runner.
Related Post: Ask UEFL - Pirates Score as Nats Fail to Appeal Fourth Out (6/29/22).
Once again, Official Baseball Rule 5.09(c) Comment's specification is as follows: "An appeal should be clearly intended as an appeal, either by a verbal request by the player or an act that unmistakably indicates an appeal to the umpire. A player, inadvertently stepping on the base with a ball in their hand, would not constitute an appeal."