We received many Ask the UEFL questions on a botched appeal play during Wednesday's Pirates-Nationals game in Washington as Pittsburgh scored the go-ahead run thanks to the Nats' failure to appeal a fourth out on Jack Suwinski's baserunning in the 5th inning. 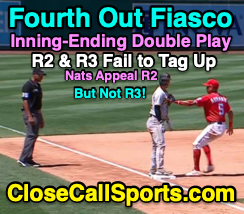 Play: With one out and two on (R2, R3), Pirates batter Ke'Bryan Hayes hit a line drive that was caught on the fly by Nationals first baseman Josh Bell (as signaled by 1B Umpire Mark Wegner), who threw to third baseman Ehire Adrianza as Pirates baserunner R2 Hoy Park arrived at third base (from second). Replays indicate that both R2 Park and lead runner R3 Jack Suwinski failed to tag up after batter Hayes' line drive was caught, and Nats F5 Adrianza tagged R2 Park to appeal that he left early, signaled an out by 3B Umpire Jeremie Rehak. Washington then left the field as Pirates manager Derek Shelton exited his dugout to argue with 1B Umpire Wegner about the catch/trap call.
Call: Upon consultation, the umpires ruled batter Hayes out on the caught batted ball and runner R2 Park out on appeal for failing to tag up. R3 Suwinski's run was allowed to score, however, as the Nationals failed to appeal that R3 left early. The Nationals, having already left the playing field, then attempted to return to the field and appeal R3's infraction, but the umpires denied this attempt, ruling the team had forfeited its opportunity to appeal since the infielders had already left the field for the dugout.
Reducing the Play into Its Parts: There are four distinct parts to this play:
1) Batter Hayes' line drive—was it a catch or a trap?
2) Appeal on R2—is R2 Park safe or out?
3) Time Play with R3—does R3 Suwinksi's run score?
4) Fourth Out—does R3 Suwinski's run score? 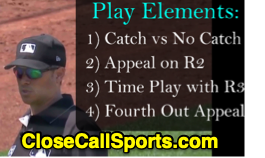 Rules and Analysis: The first part of the play is simple—the ball was caught on the fly and the batter is out. The second part of the play is also fairly simple—R2 left early (failed to tag up) and F5 executed a valid appeal, tagging the runner and looking at the umpire for a call.
The third part of the equation is a time play: first base was unoccupied and the batter was retired via the line out, so we know neither runner was forced to advance (e.g., the third out isn't a force out, which would otherwise negate the run from scoring). Furthermore, appeal plays for failing to touch a base (unless it's the batter-runner at first base) or failing to tag up/leaving early are not force plays. Replays indicate R3 Suwinski scored prior to F5 Adrianza tagging R2 Park on appeal for the third out.
The fourth part of the play is more complex. Although F5 stepped on third base while holding the ball, he did this while tagging R2 and looking to the umpire for a ruling on R2. Appeals cannot be 'combined' and inadvertently stepping on a base does not constitute a valid appeal (remember that time is not out when an appeal is being made, so this real-time appeal during a live ball is proper). 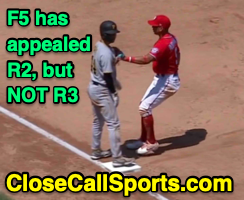 Official Baseball Rule 5.09(c) Comment further clarifies: "An appeal should be clearly intended as an appeal, either by a verbal request by the player or an act that unmistakably indicates an appeal to the umpire. A player, inadvertently stepping on the base with a ball in their hand, would not constitute an appeal."
Thus, if it's not clear or "unmistakably" indicated as an appeal, it should not be considered one. Furthermore, U3 Rehak points to R2 Park when declaring the out, so we know the umpire's ruling pertained solely to R2's status.
Finally, we have the infamous fourth out rule, also found in OBR 5.09(c): "Appeal plays may require an umpire to recognize an apparent 'fourth out.' If the third out is made during a play in which an appeal play is sustained on another runner, the appeal play decision takes precedence in determining the out. If there is more than one appeal during a play that ends a half-inning, the defense may elect to take the out that gives it the advantage. For the purpose of this rule, the defensive team has 'left the field' when the pitcher and all infielders have left fair territory on their way to the bench or Clubhouse." 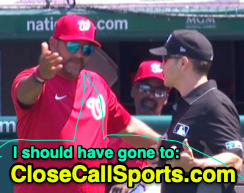 Had Washington executed a valid, clear, and unmistakable appeal on R3, that would leave both R2 and R3 out on appeals for the third and fourth outs of the inning. In such a situation, manager Dave Martinez would have been allowed to choose which of the two appeals he would like to use as the inning's official third out (and he'd wisely choose the out on R3, I presume).
However, because no appeal on R3 was made prior to the Nationals leaving the field, the opportunity to appeal vanished (so the team's attempt to return to the field to appeal was thus in vain, as explained by Crew Chief Wegner as part of a rules check), and the crew permitted R3's run to score for a combination of R3 having touched home plate prior to the third out of the inning and because the defense failed to properly and timely appeal R3's infraction of failing to retouch his original base after the air out.

Naturally, the Pirates won this game by a one-run margin. | Video as follows: