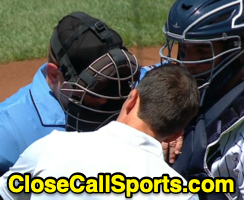 HP Umpire Mike Muchlinski left Sunday's #Astros-#Yankees game in New York after a foul ball to the head.
In the top of the 1st inning, with none out and none on, on the second pitch of the game, Astros batter Michael Brantley fouled a first-pitch 91.9-mph fastball from Yankees pitcher Nestor Cortes into Muchlinski's traditional style facemask. Muchlinski remained in the game until the 3rd inning, at which time he was exited.
2B Umpire and Crew Chief Todd Tichenor replaced Muchlinski behind home plate while 1B Umpire John Libka and 3B Umpire Alex Tosi remained in the field.
Relevant Injury History: Mike Muchlinski has previously left a game due to head injury.
> On June 19, 2014, Muchlinski left the White Sox-Twins game after a foul ball to the mask.
Last Game: June 26 | Return to Play: TBD | Time Absent: TBD | Video as follows: