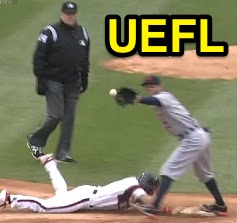 Instant Replay Review overturned 2B Umpire Jerry Layne's out call in the bottom of the 3rd inning of the Tigers-White Sox game. With one out and one on, White Sox batter Gordon Beckham hit a 0-1 fastball from Tigers pitcher Max Scherzer on a line drive to center fielder Austin Jackson, who threw to second baseman Ian Kinsler as White Sox baserunner R1 Adam Eaton arrived at second base via a head-first slide. Upon Replay Review as the result of a challenge by White Sox Manager Robin Ventura, Layne's ruling was reversed, the call was incorrect. At the time of the review, the contest was tied, 0-0. The Tigers ultimately won the contest, 5-1.