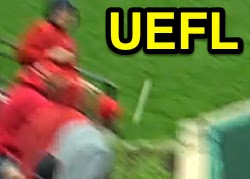 Instant Replay Review overturned 2B Umpire Toby Basner's no HR (live ball) call in the bottom of the 6th inning of the Brewers-Cardinals game. With none out and none on, Cardinals batter Allen Craig hit a 3-2 fastball from Brewers pitcher Wei-Chung Wang to deep left-center field near the top of the wall, where the ball caromed back onto the field of play. Upon Replay Review as the result of a request by Cardinals Manager Mike Matheny and initiation by Crew Chief Jeff Kellogg, Basner's ruling was reversed, the call was incorrect. At the time of the review, the Cardinals were leading, 8-3. The Cardinals ultimately won the contest, 9-3.