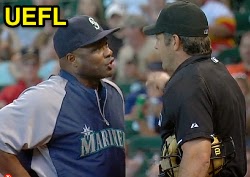 HP Umpire James Hoye ejected Mariners Manager Lloyd McClendon for bench jockeying (Unsportsmanlike-NEC) in the top of the 7th inning of the Mariners-Astros game. With none out and two on, Mariners batter Brad Miller walked on a 3-2 slider from Astros pitcher Dallas Keuchel for the third consecutive walk of the inning from Astros pitching. Replays indicate McClendon yelled from the dugout as Astros catcher Jason Castro visited pitcher Keuchel, the call was irrecusable. At the time of the ejection, the Astros were leading, 2-1. The Mariners ultimately won the contest, 9-8.