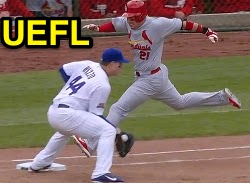 Instant Replay Review overturned 1B Umpire Angel Hernandez's safe call in the top of the 5th inning of the Cardinals-Cubs game. With two out and none on, Cardinals batter Allen Craig hit a 0-1 slider from Cubs pitcher Jake Arrieta on the ground to third baseman Mike Olt, who threw to first baseman Anthony Rizzo as Craig arrived at first base. Upon Replay Review as the result of a challenge by Cubs Manager Rick Renteria, Hernandez's ruling was reversed, the call was incorrect. At the time of the review, the contest was tied, 0-0. The Cubs ultimately won the contest, 3-0.