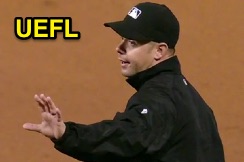 1B Umpire Will Little ejected Phillies Manager Pete Mackanin for arguing a check swing (ball two) call in the top of the 8th inning of the Mets-Phillies game. With one out and two on, Mets batter Yoenis Cespedes attempted to check his swing on a 1-2 fastball from Phillies pitcher Michael Mariot for a called second ball by HP Umpire Ted Barrett, affirmed on appeal as "no swing" by Little. Play was reviewed and affirmed by the UEFL Appeals Board, the call was correct. At the time of the ejection, the Mets were leading, 3-1. The Mets ultimately won the contest, 4-1.

Alternate Link: Cespedes drops the bat on upper inside heater, ruled no swing by Little (PHI)
Lindsay at 11:52 PM
Share