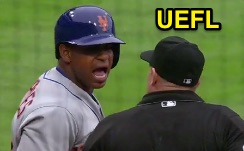 HP Umpire Will Little ejected Mets LF Yoenis Cespedes for arguing a strike three call in the top of the 9th inning of the Mets-Phillies game. With two out and two on, Cespedes took a 0-2 splitter from Phillies pitcher Hector Neris for a called third strike. Replays indicate the pitch was located over the outer edge of home plate and knee high (px .636, pz 1.710 [sz_bot 1.620]), the call was correct. At the time of the ejection, the Mets were leading, 5-3. The Mets ultimately won the contest, 5-3.

Alternate Link: Cespedes & Little are involved in an ejection play on the 2nd consecutive day (FOX)
Lindsay at 2:06 PM
Share