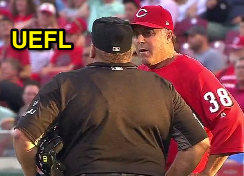 HP Umpire Fieldin Culbreth ejected Reds Manager Bryan Price (Replay Review, confirmed stadium boundary call; QOCY) in the top of the 3rd inning of the Brewers-Reds game. With two out and one on (R1), Brewers batter Jesus Aguilar hit a 0-0 fastball from Reds pitcher Homer Bailey on a fly ball to the base of the right field wall, where it was fielded by right fielder Arismendy Alcantara, ruled in play by 1B Umpire Mark Carlson, baserunner R1 Domingo Santana scoring. Upon Replay Review as the result of a Manager's Challenge by Price, Carlson's ruling was affirmed, replays indicate the ball first made contact with the outfield wall's padding before dropping to the ground; it did not stick nor pass through or under the fence and the outfield wall did not cause the ball to come to rest (see Related Post), the call was correct.* At the time of the ejection, the Brewers were leading, 4-0. 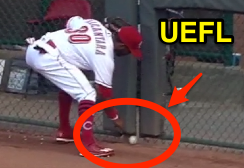