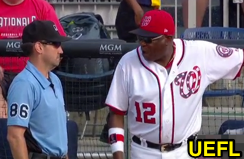 1B Umpire David Rackley ejected Nationals Manager Dusty Baker (foul ball no-call by HP Umpire Chad Fairchild; QOCN) in the bottom of the 6th inning of the Cubs-Nationals game. With none out and none on, Nationals batter Ryan Raburn attempted to strike a 2-2 changeup from Cubs pitcher Jon Lester, ruled a swinging third strike by HP Umpire Fairchild. Replays indicate the pitched ball made contact with Raburn's bat before touching the ground, the call was incorrect. At the time of the ejection, the game was tied, 1-1. The Cubs ultimately won the contest, 5-4.