2019 Stats - Ejections Spike, But So Do Correct Calls 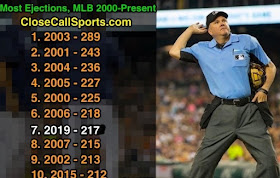 Ejections spiked drastically in 2019 as umpires concluded the regular season with the most heave-ho's since 2006, but not for a lack of umpire accuracy. Plate scores actually improved and Replay Reviews were down—and so were overturned calls. Read on for a glimpse into the MLB umpire stats for 2019.

Ejection Events, Especially for Balls/Strikes, Soared to Highest Level in 13 Years
Umpires ejected more players, coaches, and managers in 2019 than at any other time during the video instant replay era—and that includes both limited home run reviews (2008-2013) and expanded Replay Review (2014-present). 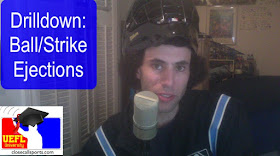 In 2019, the climb continued with a whopping 133 ejections for arguing a ball or strike call, a 40% increase over 2018. Of these 133 ejections, the umpire's call was correct 96 times, incorrect 33 times, and could not be conclusively categorized as correct or incorrect on four occasions (i.e., the computer malfunctioned, generally failing to track the pitch entirely), corresponding to a Quality of Correctness—Correct percentage of 74%.

The method of ball/strike QOC evaluation remained constant in all three years, which means that 2019's dramatic ejections increase was associated with a greater frequency of correct calls that precipitated the ejection events.

Quite notably, ejections for arguing a non-terminal pitch (e.g., ejections during the middle of an at-bat or otherwise not arguing a strike three or ball four call) skyrocketed to 57, of which the umpire's call was correct on 44 occasions, incorrect 12 times, and irrecusable once (79% QOCY).

The other popular reasons for getting kicked out were arguing check swing calls (15 QOCY + 6 QOCN = 21 EJs), pitchers throwing at batters (13 pitchers and managers tossed), arguing warnings (9), and fighting (9).

Day of Week: Umpires ejected most on Saturdays—by far. There were 49 Saturday ejections, followed by 38 Sunday and 38 Tuesday ejections, 29 on Wednesdays, 25 on Fridays, 21 on Thursdays, and 17 on Mondays, the latter two (Thu & Mon) being the MLB schedule's alternating team days off.

Effect on Winning Percentage: All else equal, if a team was winning at the time of ejection, it tended to win the game, while losing teams tended to lose. Teams tied at the moment of ejection (35 instances) added 16 wins and 19 losses to their record, or a delta .457 winning percentage.

Managers vs Players: When a player was ejected, this move generally hurt the team's chances to win. When a manager, on the other hand, was ejected, teams turned their 18 managerial ejection ties into 10 wins and 8 losses (.556).

Run Production After Ejection: Perhaps the most astonishing finding of all was that teams in 2019 fared no better after ejection than their opponents in the runs department: post-ejection, the ejected person's team scored a combined 444 runs to a total of 443 scored by the opposition.

Batting Average of Ejected Players: Players who got ejected tended to be abysmal at the plate prior to ejection, with the vast majority of ejected persons having multiple unsuccessful plate appearances prior to getting tossed. Cumulative offensive performance of ejected batters was 26 hits in 205 at-bats, or a .127 batting average.