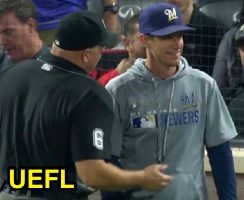 HP Umpire Mark Carlson ejected Brewers Manager Craig Counsell (Replay Review decision that upheld Carlson's out/home-plate collision no-call; QOCY) in the top of the 9th inning of the #Brewers-#Rockies game. With two out and one on (R1), Brewers batter Ben Gamel hit a 1-1 pitch from Rockies pitcher DJ Johnson on a fly ball to center field, fielded by outfielder Yonathan Daza and thrown to catcher Tony Wolters as Brewers baserunner R1 Lorenzo Cain attempted to score, ruled out on the tag. Upon Replay Review as the result of a Manager's Challenge by Counsell, Carlson's ruling (no violation of the collision rule) was confirmed. Replays indicate catcher Wolters fielded the ball prior to Cain's arrival, and in doing so, legally blocked Cain's path to home plate in accordance with Official Baseball Rule 6.01(i)(2), which states, in part, "it shall not be considered a violation of this Rule 6.01(i)(2) if the catcher blocks the pathway of the runner in a legitimate attempt to field the throw" and "A catcher shall not be deemed to have hindered or impeded the progress of the runner if, in the judgment of the umpire, the runner would have been called out notwithstanding the catcher having blocked the plate."* At the time of the ejection, the Brewers were leading, 2-1. The Rockies ultimately won the contest, 3-2, in 10 innings.

This is Mark Carlson (6)'s fourth ejection of 2019.
Mark Carlson now has 11 points in the UEFL Standings (7 Prev + 2 MLB + 2 Correct Call = 11).
Crew Chief Brian Gorman now has 12 points in Crew Division (11 Previous + 1 QOCY = 12).
*MLB modified its interpretation of Rule 6.01(i)(2) shortly after its introduction in 2014 to clarify that a catcher shall not be called for a plate blocking violation if the runner had not yet arrived at the point of blockage at the time the catcher fielded the throw and prepared to tag the runner. In this situation, F2 Wolters caught the ball and readied his tag for the sliding R1 Cain before Cain arrived to Wolters' position.