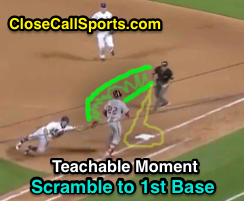 In today's Teachable, Tmac takes to Tripp's transit on a play at first base as 1B Umpire Gibson adjusts his position on a diving tag attempt in New York, a safe call affirmed via Replay Review.

During a Nationals-Mets game, Nats batter Juan Soto hits a slowly bouncing ground ball up the first base line, fielded by Mets first baseman Pete Alonso. With Soto hustling down the line, Alonso gloves the ball and immediately lunges toward Soto in an attempt to tag him out.

In this Teachable, we watch umpire Gibson's positioning as he jogs into position to observe the attempted play on the runner. Tripp slots into the keyhole angle to see the missed tag while still maintaining a look as to Soto's touch of first base. Having ruled the runner safe, Gibson patiently waits for the action to somewhat subside before indicating "safe" due to the missed tag.

Gibson's read of a potential tag and subsequent positioning to observe said tag attempt while still peeking at his secondary play of the base touch allows him to prepare to rule on any potential appeal play that may occur in the aftermath of the initial tag attempt. HP Umpire and Crew Chief Mark Carlson, meanwhile, observes whether the batted ball was fair or foul; this is a play wherein the home plate umpire, who ordinarily has fair/foul responsibility for batted balls in front of first/third base, clearly has the fair/foul call pursuant to the standard mechanic.