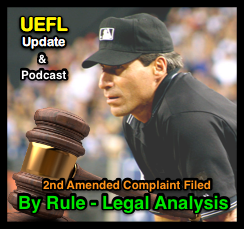 Update: MLB umpire Angel Hernandez's team filed an amended complaint in his racially-motivated discrimination lawsuit against Major League Baseball based on new evidence that the umpiring/crew chief promotion selection process is subjective and, thus, as Hernandez argues, open to discriminatory practice that has a disparate impact on minorities.

Gil's Call:  This is based on the premise—also in use by sports officials—that objectivity & following the rules as written are more ethical and reliable activities than discretion, subjectivity, and "winging it." That's why many an explanation from an umpire or referee to a coach or player begins with "by rule." When something is objective, it carries more weight—realistically and legally too—than when subjectivity is involved and goalposts may be moved without warning.

With Hernandez's prima facie case made (protected class, adverse employment decision, non-protected favored despite stats to contrary), MLB has the burden to respond to why Hernandez hasn't been promoted/assigned.

As Hernandez's team stated when it first filed this suit in 2017, objective reports and performance metrics indicated that Hernandez was an above-average umpire comparable or better than other, "less qualified" white umpires who received promotion/assignments to crew chief and World Series.
Related Post: Angel Hernandez Sues MLB for Racial Discrimination (7/3/17).

By admitting in the following depositions that its process is subjective—and that Hernandez performed well during the relevant period—MLB's difficulty now lies in defending its decisions not to promote Hernandez to crew chief or assign him to the World Series despite favorable evaluations while awarding positions to non-protected class (white) umpires who may not have been more than or equally qualified for the job or, as Hernandez originally alleged, were "less qualified."

Plaintiff Hernandez's Thanksgiving-week decision to submit a second amended complaint to include new facts and charges of subjectivity in its umpire promotion/assignment process is based on evidence obtained directly from MLB that, according to Hernandez, reveals its decisions about who to promote and place aren't all that objective for a process that purports to be "facially-neutral."

For instance, court documents indicate that Manfred pointed to Joe Torre for decision-making, though he admitted that as Commissioner he does retain final veto power.

McKendry said in his deposition that "the decisions made on crew chief assignments are done outside of any individual evaluation process" while Woodfork said, "I do not look at game evaluations" in response to the question, "Do you take the collective amount of the game evaluations in to your consideration when promoting an umpire to crew chief?"

Meanwhile, Torre said he looked at mid-year and year-end evaluations—not game reports—and agreed that based on an overall set of evaluative comments for a sample season during the relevant period, Hernandez had a good year.

MLB Admits Subjectivity, After Which Hernandez Amended His Complaint
SIDEBAR: Hernandez's attorney Kevin Murphy also asked Woodfork in his June 21, 2019 deposition what Woodfork considers in deciding what his opinion is in promoting crew chiefs, to which Woodfork answered, "I know the information; I don't specifically put them in front of me," upon which counselor Murphy, referring back to Woodfork's prior statement that "I do not look at game evaluations," asked, "How do you know the information if you don't see it" at which time MLB's lawyer Adam M. Lupion objected. Woodfork would go on to say, "My recommendation that I usually put forth for crew chiefs includes data that is for, both, objective and subjective in that it will be included in the evaluation process."

Based on this and other "new" evidence, Hernandez amended his complaint based on allegations that key decision-makers Woodfork and Torre (who answer to Manfred) admitted the promotion/assignment process includes criteria "outside the merits of an umpire's performance" to include "overwhelmingly...subjective criteria" including non-objective opinions.

Hernandez's team allege that the promotion/selection processes thus are "based largely, if not entirely, on subjective criteria and the opinions of Major League Baseball's umpire executives who are involved in making those decisions."

Nonetheless, Hernandez's original complaint painted a picture of excellent evaluations and performance reviews—yet the league failed to promote him. Precedentially, it recalls former Triple-A umpire Pam Postema's 1992 lawsuit in the United States District Court for the Southern District of New York (same court as Hernandez's suit) against the National League based on similar grounds—excellent performance reviews but a failure to promote.

Postema and the league settled the lawsuit out of court, which itself recalled umpire Bernice Gera's successful 1971 lawsuit against the National Association of Baseball Leagues. Meanwhile, Theresa Cox-Fairlady similarly sued baseball—for harassment—and similarly settled out of court.

As Postema wrote in her memoir, "Don't give me that line, 'Baseball is America's game.' To me, baseball is the exact opposite of what America stands for."

Manfred previously stated that MLB must improve its minority hiring.

Hernandez has claimed damages and injuries including loss of earnings/earning capacity, loss of career opportunities, mental anguish (hence the reason the court ordered a psychological examination), physical and emotional distress, humiliation and embarrassment, and loss of professional reputation.

Former MiLB Umpire and Sports Lawyer Brandon Leopoldus joins The Plate Meeting Podcast to discuss the ramifications of Hernandez's lawsuit in the video as follows: