MLB Memo to Teams - Umps to Confer on Intent HBPs 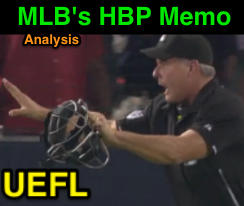 After MLB Commissioner Rob Manfred announced a memo that umpires will now confer on certain hit-by-pitch situations to determine pitcher intent (e.g., for warning or ejection), some speculated that a home plate umpire's game management role may be drastically altered and perhaps hindered. Gil's Call posits that the umpire's ability to handle such a tense situation isn't going anywhere.

With the memo's reported characterization that umpires will confer to determine whether the act was intentional, the vague wording may lead some to conclude that umpires will conference after such a potentially hostile act prior to managing the situation with ejection (or warning)—as opposed to the plate umpire's traditional role of immediately responding to the intentional HBP.

To review, Official Baseball Rule 6.02(c)(9) (Intentionally Pitch at the Batter) states that "if, in the umpire's judgment, such a violation occurs, the umpire may elect either to: (A) Expel the pitcher, or the manager and the pitcher from the game, or (B) may warn the pitcher and the manager of both teams that another such pitch will result in the immediate expulsion of that pitcher [or a replacement] and the manager."

In my estimation, however, the plate umpire's ability to respond immediately—as exhibited by HP Umpire Tim Timmons during a 2011 ejection in Atlanta after Cubs pitcher Carlos Zambrano threw at Braves batter chipper Jones, nearly igniting a benches-clearing brawl before Timmons quickly shut it down through, and this is key, immediately ejecting Zambrano—will not be impeded by the new guidelines.

Instead, I would consider the new guidelines an addition to the MLB Umpire's Manual section on "Crew Consultation and Getting the Play Right."

To that end, MLB's new directive may result in more situations being looked at by four umpires as opposed to one (see Ejection 070 - Nelson/Bell), but likely won't prevent any plate umpires from acting on instinct and feel for the game. In other words, I'd expect that UICs will still warn/eject as usual with no warnings or ejections being rescinded, but if no action is taken (or a warning, but not ejection, is given), that the crew will retain the ability to decide after-the-fact to upgrade a no-call to a warning/ejection or to upgrade a warning to an ejection.
Related Post: Handling a Bench Clearing Incident - Battle of Texas (5/2/17).