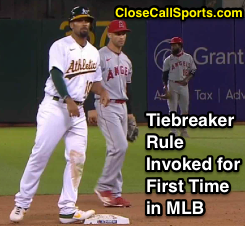 Opening Day invoked the first instance of baseball's extra inning tiebreaker rule in major league history, thanks to an Angels-Athletics game that took 10 innings to play, ending when Oakland's baserunner placed at second base to begin the inning, Marcus Semien, scored the winning run on a walk-off grand slam.

How about that for a first game as acting crew chief for Brian Knight, an umpire normally the number 3 on a crew, given the gig after interim chief Marvin Hudson was held out of the game prior to first pitch? Mike Muchlinski, Tom Woodring, and Adam Hamari rounded out the shorthanded crew.

Oakland had a chance to close out the game in regulation, taking a 3-2 lead into the top of the 9th inning, when Angels batter Jason Castro homered to tie the score.

Los Angeles (Anaheim)'s Shohei Ohtani later struck out to end the frame. In the bottom of the 9th, the A's couldn't score, with Marcus Semien flying out to Angels catcher Jason Castro to send the game into extras.

The top of the 10th inning began with Ohtani—LAA's final out in the 9th—placed on second base. The A's eventually retired Ohtani and the Angels, sending the tied ballgame into the bottom of the 10th.

MLB instituted the rule after a two-year minor league trial run. According to MiLB statistics, 73% of games ended in the 10th inning with the runner-on-second tiebreaker procedure in effect, compared to 45% of games ending in the 10th under normal bases-empty rules.

It was MLB's first-ever regular season invocation of the extra inning tiebreaker | Video as follows: