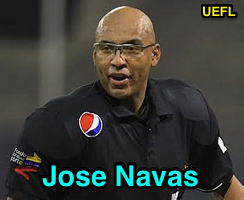 His Minor League journey began in 2015's Gulf Coast rookie league, after which Navas traveled through the Florida State and Southern Leagues before his 2019 midseason promotion to the Triple-A International League and Arizona Fall League assignment.

Navas was the crew chief for the 2019 MiLB All-Star Futures Game in Cleveland and is a past recipient of the Venezuelan Professional Baseball League's 2017 Gualberto Acosta Award for Umpire of the Year, and the Appalachian League's inaugural Dale Ford Award for top umpire in 2015.

Navas is one of 10 rookie umpires to make his MLB debut during the 2020 regular season.
Lindsay (@LindsayImber) at 4:18 PM
Share