Perfect Game for John Tumpane is First in UEFL History 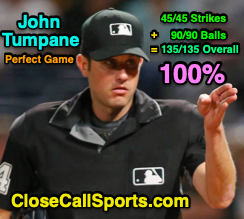 When home plate umpire John Tumpane stepped off the field following Game 2 of the 2020 American League Championship Series between the Houston Astros and Tampa Bay Rays, he accomplished a UEFL first: Tumpane called a perfect game with 135 correct calls over 135 callable pitches thrown for a Preliminary UEFL f/x score of 100%.*
In all, the baseball world has seen some eagle-eyed umpiring over the past few postseasons, beginning with Joe West's 99.4% mark in a near-perfect Game 3 of the 2018 Red Sox-Astros ALCS, 99.3% score by James Hoye during Game 4 of the 2019 Houston-Tampa Bay ALDS, and, earlier in the 2020 postseason, Jordan Baker's 99.4% finalized score in Game 1 of the American League Wild Card Series between the New York Yankees and Cleveland Indians.
Related Post: Joe West Sets % Record in Near-Perfect Game in ALCS (10/16/18).
However, Tumpane's perfect game is a UEFL first. According to an article from The Ringer, no umpire has ever called a perfect game for both teams, though 25 umpires have called a perfect game for one team or the other.

As far as the ML Public score is concerned, Tumpane's preliminary number was 96.3% (130/135) with a matching 100% rating for ML Private, meaning that while the ML Public perfection problem persists, Tumpane not only beat the computer using the ZE estimate, but also, for the first time, put up a flawless performance using UEFL f/x criteria for day-of plate scores.
And just to prove that perfection isn't good enough for some people, career ejectee Josh Donaldson took to twitter to complain about Tumpane, tweeting, "Top 3 worst ump in the game" and "Trust me this guy has no idea what the zone is in the rule book. He's never wrong in his words."
So there you have it: the umpire who "has no idea what the zone is" just called a perfect game, preliminarily.
*Update: The post-game processed Final numbers brought Tumpane's plate score down from 135/135 to 134/135 = 99.3% (Skew: +1 HOU). For more information on UEFL f/x 3.0 and how Preliminary (same day) vs Final (overnight or postgame processing) numbers work, visit our introductory article:
Related: About UEFL f/x 3.0 Plate Scores for Postseason (9/29/20).
PS: What was the pitch that took Tumpane's UEFL f/x perfect game away from Preliminary to Final (he's still perfect on ML Private)? A strike one call to Austin Meadows in the bottom of the 2nd inning with pz 3.63 / RAD 3.51 / MOE 3.42 and sz_top 3.41. That's right, Tumpane missed out on a post-game processed perfecto by 0.1 inches.