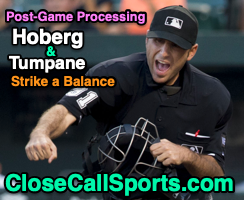 Between umpires John Tumpane and Pat Hoberg, only two out of 276 callable pitches seen Monday were improperly officiated. When we introduced UEFL f/x 3.0's multi-stage plate score format for the 2020 MLB postseason, we explained that baseball's strike zone computer runs in phases, returning multiple scores because the technology is unable to reliably assess batter height during real-time gameplay.
For instance, during one such postseason game, the computer changed batter strike zone height values in 53% of the pitches it tracked during post-game processing.
Alternately, one could say the computer changed its original answer over half the time. 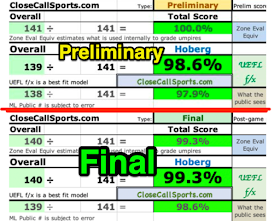 Put differently, for over half of the pitches thrown, a trigger activated during post-game analysis that compelled an adjustment to the batter strike zone height, such as a close pitch near the edge of the zone/boundary. 53% of all pitches were adjusted, and the 47% of the pitches not adjusted...may well have been adjusted had the post-game analysis stayed true to the process of adjustment (as it is, possibly to save computing power or other labor, the computer only adjusts certain pitches).
Sometimes these adjustments change umpire QOCs and sometimes they don't.
Preliminary: During each game, StatCast uses placeholder values for batter bottom/top strike zone boundaries known as sz_bot and sz_top, respectively, regardless of the batter's actual stance during the pitch subject to evaluation. Thus, the score returned after each game known as the Preliminary score is based on placeholder height values and is a best-guess expectation of what the batter zone heights should be.
Related Post: About UEFL f/x 3.0 Plate Scores for Postseason
Final: After each game, the computer gets to work replacing many of these placeholder sz_bot and sz_top values with actual/observed figures. Sometimes they might match the placeholders and sometimes they don't. In the end, a new plate score is generated known as the Final score, generally scraped the morning after the game but occasionally later on game-day.
Oftentimes, an umpire's Preliminary score will improve in the Final calculation, while, other times, it will decrease, as the computer calculates whether a zone height adjustment affected Quality of Correctness for a given edge pitch call.
Monday's LCS Umpires: Between Tumpane and Hoberg, the umpires saw 276 pitches and officiated 274 properly during Monday's League Championship Series action for a combined UEFL f/x score of 99.3%. Both figures (274/276 and 99.3%) are true for Preliminary and for Final numbers.
But between Preliminary and Final, both individual umpires saw adjustments.
Tumpane: Tumpane famously earned the first perfect preliminary plate score in UEFL f/x postseason history Monday afternoon in San Diego, scoring 90/90 Balls + 45/45 Strikes = 135/135 = 100%.
Related Post: Perfect Game for John Tumpane is First in UEFL History (10/12/20).
Which meant the only place for baseball's computer to adjust Tumpane would be downward, and the computer didn't fail to disappoint, dropping one of Tumpane's called strikes to the incorrect category based on actual vs placeholder (or expected) batter height, and changing his 135/135 to 134/135, or 99.3%.
Hoberg: On the other side of balance sheet, Hoberg originally scored 91/91 Balls + 48/50 Strikes = 139/141 = 98.6%, and his post-game processing adjustment changed an incorrect strike call to a correct strike call, bumping his score to 140/141 = 99.3%.
Combined: In the end, baseball maintained pitch calling equilibrium as the Preliminary full-day score for Tumpane + Hoberg of 181/181 Balls + 93/95 Strikes = 274/276 = 99.3% remained the same overnight, which is an effect that happens quite often with computer processing: over the whole, the adjustments tend to largely balance out, though during individual games, they might increase or decrease a specific umpire's score.
Conclusion: Unfortunately for the robot umpire concept, the macro view of averages isn't quite good enough: the technology must be perfected to call pitches to accurate, adjusted batter height in real-time, specific to the game in which the pitch occurs and, as the Tumpane/Hoberg flip-flop demonstrates, the computer has not yet proven itself consistently and accurately capable of this: not while a majority of pitches are routinely changed during post-game processing. As such, the computer's adjustment to reflect overall umpire accuracy while nonetheless altering individual scores suggests a proof of technology's shortcomings.
PS: What was the pitch that took Tumpane's UEFL f/x perfect game away (he's still perfect on ML Private)? A strike one call to Austin Meadows in the bottom of the 2nd inning with pz 3.63 / RAD 3.51 / MOE 3.42 and sz_top 3.41.
That's right, Tumpane missed out on a post-game processed perfecto by 0.1 inches.
Video as follows:
Alternate Link: Computer Adjustment Demonstrates Its Pitch-Calling Flaw (CCS)
Lindsay (@LindsayImber) at 9:19 AM
Share