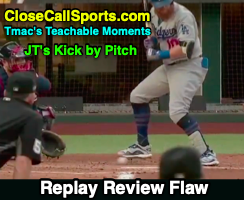 During Los Angeles' NLCS Game 3 blowout of Atlanta, Dodgers batter Justin Turner was awarded first base after sticking his foot into a first-inning pitch. This uncalled distinct kicking motion exposed a problem with Replay Review and pointed out a plate umpire's vulnerability to catcher positioning on balls in the dirt.
With two out and two on (R1, R3) in the top of the 1st inning of a 7-0 game, Turner faced a pitch in the dirt from Braves starter Grant Dayton (now with a 36.00 ERA this postseason series), appearing to kick at the pitch and, in doing so, cause the ball to carom off his right foot and to the backstop.
Initially no-called by HP Umpire Jim Reynolds, the Braves challenged that the ball had touched Turner, and Replay Review agreed, ruling the play a hit-by-pitch and awarding Turner first base—despite Turner appearing to intentionally kick at aka lean into the pitch.
The Replay problem here is quite simple: Replay Review is designed only to determine whether or not a pitch made contact with a batter, and Replay Official Mike Muchlinski quickly determined that Turner did come into contact with the baseball.
Unfortunately, Replay Review Regulations prohibit video from determining whether the batter made no attempt to get out of the way of a pitch (much less intentionally leaned into it), as in Official Baseball Rule 5.05(b)(2), which states, "The batter becomes a runner and is entitled to first base without liability to be put out (provided he advances to and touches first base) when—He is touched by a pitched ball which he is not attempting to hit unless (A) The ball is in the strike zone when it touches the batter [outcome: dead ball strike], or (B) The batter makes no attempt to avoid being touched by the ball [outcome: dead ball, ball]."
Replay can determine IF a batter was touched by a pitched ball, but not HOW it happened.

In 2017, we wrote about the problem with not enough plays being reviewable and this is one of them. Through steadfast dedication to being technically correct (the best kind of correct), baseball again misses out on actually officiating this play correctly.
Related Post: Tmac's Teachable Moments - Let's Fix Replay (1/19/17).
Lastly, Reynolds is blocked out by the catcher due to the ball in the dirt, the catcher lunging to block it, and Turner moving his back foot deep in the box (as opposed to front foot) into the ball's trajectory. The third base umpire is likely blocked by Turner's body, 1B Umpire Dan Iassogna is looking upward for check swing potential, the second base umpire is on the rim of the outfield grass, and the two line umpires are far removed.

This play is the perfect storm and impetus to, once again, fix Replay Review, and if only the Braves had woken up to play a baseball game on Wednesday, this wrap-up might be a bigger story. Baseball should write LA a thank you card for a history-making scoreboard run-up because the league office got lucky. | Video as follows: