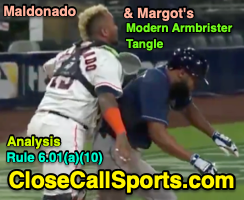 When Rays batter-runner Manuel Margot became entangled with Astros catcher Martin Maldonado after bunting during Game 3 of the 2020 ALCS, HP Umpire Jeff Nelson signaled "safe" in lieu of interference. Was this call correct and what do Carlton Fisk and Ed Armbrister in the 1975 World Series have to do with it?
When Tampa Bay put two runners on base with none out in the top of the 6th inning of Game 3, Margot stepped to the plate and attempted a sacrifice bunt on the first pitch he saw from Enoli Paredes, batting the ball into the air front of home plate.
As Maldonado broke from behind the plate in an attempt to catch the bunt pop-up, the right-hand hitting Margot ran toward first base, both players crossing in front of home plate and briefly colliding with each-other, causing Maldonado to trip and fall (and, in doing so, not catch the batted ball in flight).

HP Umpire Nelson saw the play develop and then displayed a "safe" mechanic, to signal his ruling that nothing illegal had occurred: no interference by the offense, no obstruction by the defense.
Despite the general baseball axiom that the fielder has the right of way on all batted balls (while the runner has the right of way at any other time), Official Baseball Rule 6.01(a)(10) Comment specifies how this precise play—inadvertent tangle-untangle between catcher and batter-runner—should be officiated.

Specifically, OBR 6.01(a)(10) Comment states, in part, "When a catcher and batter-runner going to first base have contact when the catcher is fielding the ball, there is generally no violation and nothing should be called."
This ruling dates back to the 1975 Fall Classic, when Fisk and Armbrister tangled during Armbrister's own bunt attempt in front of the plate, when HP Umpire Larry Barnett no-called the collision because both players were actively pursuing their respective goals, creating an incidence of incidental contact. The call would have been different had, for instance, Margot not attempted to run to first base. Had this occurred, such mindless lingering would have likely resulted in a call of interference.
Video as follows: