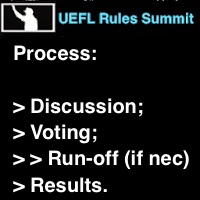 The first round of voting for the 2019 UEFL Rules Summit is now complete, with all but one proposal final. The sole question for runoff consideration is whether to eliminate the Margin-of-Error for preliminary, but not post-game processed pitch location data.

Run-Off Ballot:
Prop 6-2-a: Qualified Elimination of Margin of Error
Proposes elimination of all references to Margin of Error for pitch location data if numbers have been adjusted pursuant to postgame processing. Margin of Error rules would remain in place for all numbers not adjusted via postgame processing. PRESENT RULE: Margin of error exists in multiple locations (Kulpa Rule, Miller Rule) to acknowledge various errata that exist with pitch-tracking system, including those errors indicated by the manufacturer and acknowledged by Major League Baseball including but not limited to calibration, vertical zone, 2D vs 3D zone, tracking, modeling, and capture errors. Postgame processing addresses vertical zone error by adjusting sz_bot and sz_top where appropriate. For more information about postgame processing, refer to: Postgame Processing Changes Gibson's Strike EJ QOC (9/21/19).

Prop 6-2-a: Should the proposed qualified elimination of Margin of Error be adopted?
Alternate Link (Click here) / Created with Poll Maker

Items that passed and Appeals Board retentions are indicated in green highlight below while items that did not pass are indicated in red highlight. Proposals that gained a majority of votes will become rules for the 2020 Umpire Ejection Fantasy League Season.

Rule 4 - League Scoring
Prop 4-2 A: Ejection by Non-Calling Umpire - 49.3% YES.
> Would have eliminated QOC for all ejections on behalf of a crew-mate.

Prop 4-2 B: Replay-Oriented Ejection QOC Points - 42.9% YES.
> Would have applied ejection points based on Replay's Confirmed/Stands as opposed to QOC Y/N.

Prop 4-3: Postseason Incorrect Crewmate Ejections - 47.7% YES.
> Would have changed postseason QOCN/crewmate ejection points to -3 instead of -2.

Prop 4-4: Defining Start and End of Season - 22.7% YES.
> Would have added a rule declaring when an individual umpire's season begins and ends.

Prop 4-4 AR: Fill-Ins Eligibility for Ejection of Year Award - 82.6% YES.
> Adds language to rule allowing any umpire with an ejection to receive this award.